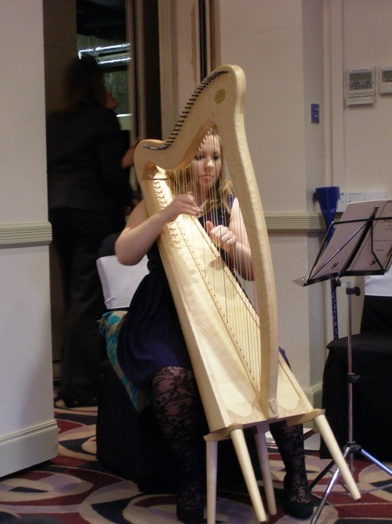 Coming from a musical family, there was no doubt that I would pick up a musical instrument, simply a question of which. After a false start on the violin, I started on the piano at the age of 6 and followed with the flute at the age of 9. By the age of thirteen, I had began singing lessons to support my favourite hobby of amateur dramatics, but when a harpist gave a presentation at my school, I was mesmerised by that distinctive sound.

Initially, my parents were thrilled by the idea of having a harpist in the family and impressed by the determination that led me to get up at 6am every school day so that I could practise on the school harp, a Salvi lever harp, before school started. After my parents’ initial surprise at the cost of pedal harps, my father gave up on his dream of owning an MGF and his savings went on my first harp – a Salvi Orchestra pedal harp. As I remind my father regularly – my harp has depreciated much less than the MGF would have done!

Since then, I have performed at a variety of events and locations – most notably for the Queen in 2005, when I was chosen by my teacher to accompany her at the official opening of Danson House, Bexleyheath.

After moving to Edinburgh at the age of 19, I have taken up the lever harp (a Pilgrim Clarsach), and I try to combine techniques of both instruments in my style. This is the harp that I now prefer to use professionally, due to its ease of transport and speed of set up. Despite the difference in size, the smaller harp is more than sufficient for the majority of venues.